Back before I started at Megacorp What Counts Things, I worked for a smaller consulting firm. Back at that firm, we had a fellowship program. What that means is that there was a group of really freaking smart people we paid to say they were our friends. One of those really freaking smart guys was Alan Kay. If you’re not familiar with him, he’s the guy who invented the laptop computer, the GUI, and object-oriented programming. He’s also a spectacular guitar and pipe organ player. He’s also married to the original writer of Tron… Basically, he’s cooler than you or I will ever be.

There was a time where we were trying to think how we could use Squeak as an enterprise tool. Alan agreed to spend the day with us to think it through. We didn’t end up doing much with it; mostly because we didn’t have the time to invest. But, he brought Dave Smith with him that day who was really freaking smart himself.

Fast forward a number of years and I saw his name pop up in conjunction with a kickstarter project. It was for an affordable, portable VR headset that was focused on quality, the Wearality Sky. So, being a longtime fan of VR and knowing what a freaking smart guy Dave was, I was an early contributor.

Virtual Reality and I go a long way back. My first degree was heavily focused on 3D animation and I was an early adopter of VRML. At the time, I thought I was a pioneer of “experiential poetry,” where words were mixed with environments that the user could navigate through. The only issue at the time was that the interface was a bit clunky and it took a really powerful computer just to render the environments (complete with 3D audio). Now, with Unity, Google Cardboard, and ubiquitous broadband, the time is ripe for VR and AR. Just ask Pokémon Go players.

In fact, I wrote about the evolution of Viewmaster last Christmas. The device did a great job of melding the Viewmaster experience with VR/AR content. However, the quality of the VR felt a bit like a toy. 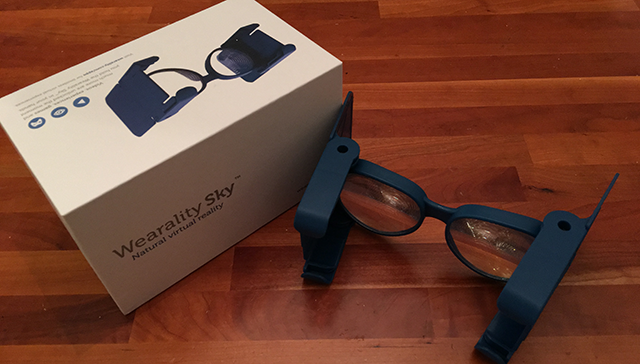 It’s only been 24 hours, but I can safely say this is the best VR headset I’ve used – and it folds to fit in your pocket! At the heart of Wearality are high quality Fresnel lenses (courtesy of Lockheed Martin).  The lenses provide a 150 degree field of vision, which is significantly more than the standard 90-100 degrees from other units. The difference is substantial. The experience is far more immersive than other headsets I’ve used.

It works with Cardboard apps, so there’s plenty of content out there. But, you’ll be able to enjoy that content more because it fills in your peripheral vision more completely. At first, the image quality didn’t seem that great to me, but I realized that wearing my glasses fixed that. It fits comfortably over glasses, too.

If I have a complaint about Wearality Sky, it’s that the documentation is a bit sparse. It took me longer than it should have to figure out that what I thought was the carrying case, was actually the fabric shroud to block out side light. It comes with a snap-on headstrap that is easy to install. 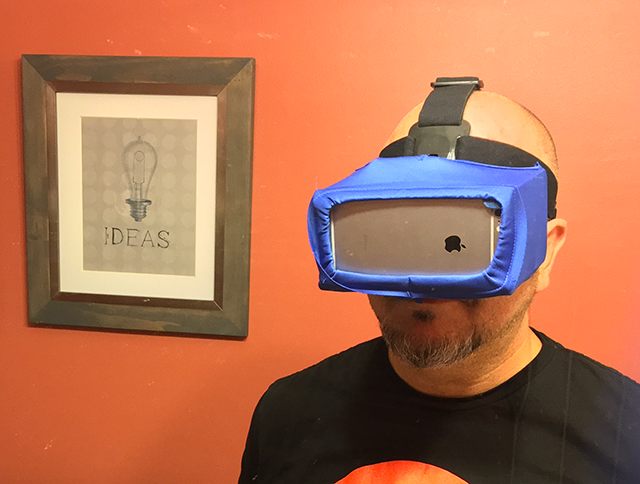 Registering the unit to work with Cardboard was as easy as pointing it to a QR code. After that, I could open any of my Cardboard apps and see it in a new way. Personally, I recommend checking out Revolt by Muse – it’s like being inside a music video, but there’s enough content out there to keep anyone entertained for a long time. With companies promising to deliver sports content in 3D, the body of content is constantly growing.

If you’ve been dying to experience VR and want to do so in the most shareable way, I recommend the Wearality Sky as an option.