They’ve made it easy on me to make my weekly post. Today, after much anticipation, Google released an update to it’s search application for the iPhone. This version includes searching with voice commands. In order to search via voice, you simply hold the phone up to your ear and speak your search keywords. The app fires the voice clip off to Google’s servers which parse the audio into text, and then kick back the results to the iPhone.

As soon as I saw it was available, I downloaded it to take it for a spin. I was impressed with the accuracy. Even with my voice being ravaged by some virus swirling around the 3:10 showing of Madagascar 2 we took my daughter to see, Google quickly recognized my plea for “pizza” and fired back results which included the Wikipedia article on pizza as well as several listings for pizza places in our neighborhood. For each local result,you have the ability to call or get directions directly from the search results page. The image below is of “pizza” being processed. 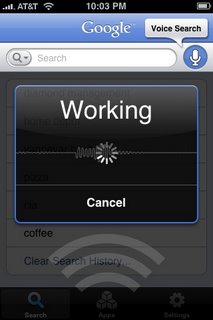 Somewhere on the back end, there must be one hell of a matching algorithm. It understood “vannevar bush,” even though I can’t remember how to spell his first name most of the time. I’ve been working on a project to make a documentary on the development of digital recall over at http://www.rememex.com and this technology fits right into my research. One of the metrics for digital recall to be successful is that the actual recall portion be both accurate and natural. This goes a long way towards both.

It even correctly identified the name of the company I work for which has several words and an ampersand. Only once, when I was showing my wife, did it fail. I think audio from the television confused it and it interpreted “pizza” as “CIA.” I’m glad I didn’t try ordering from there… My file’s probably big enough already.

My one disappointment is that you can’t search your contacts through the voice capability. You still need the keyboard for that. I did confuse my wife by speaking her name loudly and clearly… But it pulled up the imdb entry for the film that shares her name.