Every once in a while, an application comes along that borders on magic. It usually involves an element of “why didn’t I think of that?” The last application I felt this way about was Delicious Library. That was clever use of the existing hardware to perform an unconventional task. The application has only gotten better with the newly released Library v2.0. The latest application making me feel all tingly is an application I recently loaded (for free) onto my iPhone: Shazam. 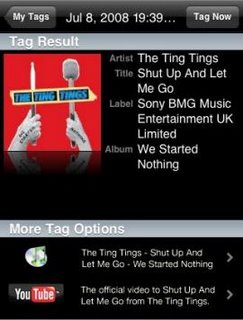 You’re out at a bar with your friends and a song comes over the sound system that you don’t recognize. Your one friend who’s always up on the latest bands says, “I love these guys.” Not wanting to seem uncool, you nod your head and say, “yeah…” You then avert your gaze for fear of follow-up questions.

Just then, you remember a little free app you installed on your iPhone called Shazam and you fire it up. You press the Tag Now button and your phone begins listening. You easily cover the time by taking a long, slow sip off your PBR and maybe fumbling in your pocket for a smoke. In the mean-time, Shazam has fired off the recorded clip to its servers and compared it to its extensive music database. In a matter of seconds, the application has identified the song, artist, and album of the music playing in the bar.

At this point, you hold your head high and say, “I’ve been into the Ting Tings for a while now. Have you seen the video for this?” You then click the YouTube link provided by Shazam and your friends crowd around your phone to watch while you bathe in the warm glow of your new alterna-God cred. When nobody’s looking, you purchase the song from iTunes using the link Shazam provides just in case anyone asks to hear the song on your phone.

I’ve tried out Shazam in a number of environments and the hit rate is phenomenally accurate. Even while buying my lunch in a noisy greasy spoon today, it was able to ID an Ashlee Simpson song amid the racket. I didn’t use the Purchase From iTunes option in that case (at least, that’s my official stance), but the fact that the music was in the background in a noisy environment and was still recognized added to the mystique.

How many times have you and your friends fretted over who performed a particular crappy 80s song? Now, you’ll be the first to shout, “Haircut 100!” You’ll seem like you’re magic. Or, maybe they’ll laugh at you for knowing Haircut 100 and having Ashlee Simpson in your playlist…