Brilliant presentation by Dan Ariely today at our All Hands meeting. I’m fortunate to work at a company that has a number of brilliant people enlisted as fellows. Among them, the inventor of the graphical user interface, the founder of the Electronic Frontier Foundation, the guy who came up with the original electronic spreadsheet, and many others including Dan. 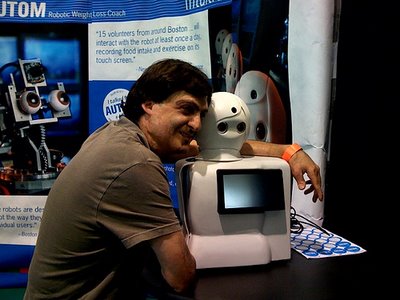 Dan is an expert in Behavioral Economics and specializes in irrational behavior during the decision-making process. His specific angle is that it is possible (and not that difficult) to test for and predict irrational behavior. Predictably Irrational is the title of his new book and was the subject of today’s presentation. Primary to many of his assertions is the statement that, presented with complex choices, people will resort to their default behavior. For example…

Let’s say you normally purchase Trix as your breakfast cereal. This week, however, you’ve decided to try a new cereal. Maybe you’ve decided to try something healthier or more grown up. When you get to the store, you are offered 32 different types of whole grain, high fiber, vitamin-fortified boxes of cereal. After staring at the boxes for some period of time, chances are you’re leaving the store with a box of Trix.

The usability implications of this assertion are immediately clear. If you have a clearly framed, easy to decipher navigation scheme, your users will make the appropriate choices with little difficulty. If, however, they are overwhelmed by the complexity (and it’s clear it doesn’t take much complexity), they will fall back to the default and Google for an answer. Instead of offering the user all possible options or overwhelming them with content, provide a few clear options with the opportunity to drill deeper.

Another presentation (regarding communications) compared the resumes of Bill Gates and Steve Jobs. Bill Gates’ resume was a compost heap of words detailing every accomplishment in excruciating detail, while Jobs’ was a 3 paragraph affair with pointers to more info. This effect can be seen in this comparison of their presentations. As a matter of fact, this effect can be seen in the product of their respective companies.

If we work to understand (I mean, really understand) the behaviors of our users, we can design an experience that helps them arrive at the correct destination, even if the path there initially seems irrational.