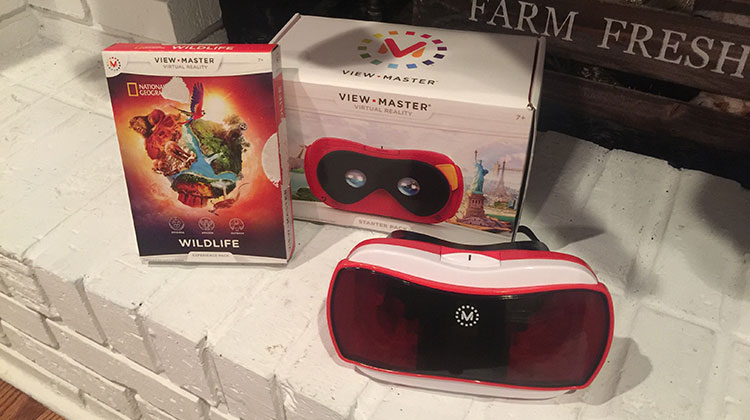 So, the gift that keeps on giving at my house this holiday season is the Viewmaster Virtual Reality Starter Pack. It’s basically Google Cardboard for kids. It works with any Cardboard-compatible smartphone and was easy to get up and running, then the payoffs just kept coming.

I’ve been involved with VR since the mid 90’s when I was coding “4D poems” in VRML. It seemed like every couple of years, VR would makes some noise and then fade back into the background. But recently, it seems like VR has reached a bit of a tipping point.

Starting most recently with the Oculus Rift‘s Kickstarter campaign, VR has been back in the headlines again. The promise of an affordable way to pump HD video into each eye to create stereoscopic vision got people excited about the possibilities again.

At the same time Oculus was making noise, there was a parallel effort to create a low cost version of a VR headset leveraging existing technology. I have been a participant in a kickstarter for just such an effort, the Wearality Sky. Basically, it’s a pair of high quality fresnel lenses and a frame to hold a smartphone. They have been focused on the optics because they realize that the technology you slip into the frame will keep improving, but they’ve done a good job of creating a flexible platform for phone-based VR.

Another example is an initiative that focused on driving the cost down to achieve a VR platform. In fact, it is so low cost that the platform is constructed out of cardboard. Google Cardboard is, at its core, a software platform. The cardboard frame was simply the cheapest fastest way to get the software into people’s hands (and onto their faces). They have SDKs for Android and Unity, so anyone with the specs can create Cardboard apps.

As with any good innovation, people will innovate on top of it. Enter Viewmaster. What viewmaster did was create a (relatively) kid friendly VR solution on the Cardboard platform. After a little bit of confusion figuring out what needed to be installed on my phone in order to get started, we were enjoying the Viewmaster Experiences within minutes.

Viewmaster still ships “reels” to enable the product, but these serve mostly as AR launchpads for the different apps. Pretty soon, we were jumping from biome to biome looking at 3D animations of animals in their natural habitat. We also explored some destinations with informational pop-ups over points of interest.

We were able to step outside the Viewmaster sandbox and enjoy pure Cardboard functionality, as well. We took the Cardboard “Urban Hikes,” saw some cool demos, and rode a rollercoaster through some ancient ruins. After downloading the Google Street View app, we were able to enter our old address in Los Angeles, click on the Cardboard icon, and take a 360º stroll around our old neighborhood.

With oculus focused on improving the display, companies like Wearality focused on premium optics, and Google driving a software solution with ever-increasing market penetration, VR seems to be becoming less “virtual” and more “reality” every day.