At my day job, we’ve been looking at mobilizing our people to get the most benefit from our social channels.  We’ve encouraged people to begin blogging internally and we promote particularly salient posts to the outside world.  Blogging started slowly, but it’s picking up speed now as people begin to see the value in it and start to see that it’s not just firm leadership getting their voices heard.  However, there are many other channels we can leverage and we’re trying to figure out how to best use the social horsepower inherent in the firm.

It seems to me that, socially speaking, your company should look much the same from the outside as it does from the inside.  So, as a test, I conducted a very non-scientific poll of our people to see what the social footprint of our firm was from their perspective.  I sent out an email blast asking people to respond with a list of the social platforms they were using and in what capacity they were using them.  Based on my assumptions around popularity and viability as a business channel, I asked them specifically about Twitter, Facebook, LinkedIn, and blogging.  I also asked them to let me know if they were using it in a personal or professional capacity (if they were using it at all).  Here’s what the results looked like: 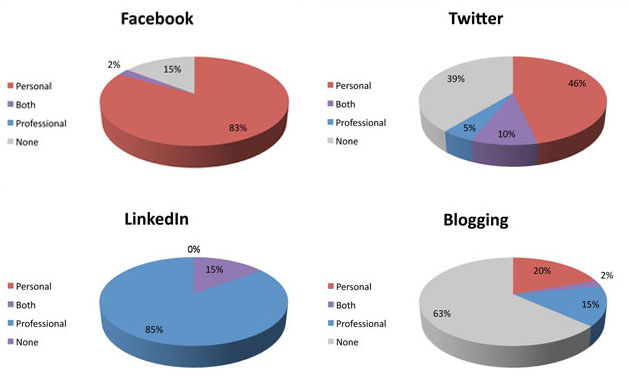 A quick readout shows that our people are most engaged on Facebook and LinkedIn, the most network-y of the social networks.  There’s also a pretty clear divide between Facebook and LinkedIn as personal and professional tools, respectively.  It’s also interesting that our people were least engaged in blogging, since that’s the area we are tackling first.  Given the success of our blogging initiative, I’ll assume that we’ve moved the needle in that quadrant since I’m sure more than 15% of our people have contributed to our blog content.

So, if my assumption were true, it would seem that we should have undertaken a focused effort to leverage our LinkedIn presence first, then found a way to get our people to use Facebook in a more professional capacity…  However, we’ve had great success in the area of blogging (both in terms of business development and media exposure) and such enthusiastic participation, that I feel social mobilization is actually a change management exercise.  It’s a matter of deciding where you can have the most impact and offering your people the tools and encouragement to participate there, rather than discovering where your people are and trying to piggy-back off that presence.  For us, blogs offered the best opportunity to get our ideas out there in a more fully-realized manner, so it made sense to begin there.

That being said, writing blog posts with no social support is a bit like putting your candle under a barrel.  The different channels need to work in concert. So, now we write blog posts based on our best thinking, publish it so it’s accessible, then support it by circulating pointers to the content via Twitter and LinkedIn.  While it’s a formula that seems to be working, we could still do quite a bit to get more of our people mobilized in the efforts to publicize our writing.  But, I’ll tackle that in another post.