A friend of mine is co-owner of an iPad. That’s right, he shares it with a friend. While he doesn’t have primary custody, he got naming rights and calls it “Paddington.” Even though I called him a 12 year old girl, he offered to lend the iPad to me for a few days (after clearing it with Paddington’s mom). As he handed it over to me, he said, “Without the internet, this thing’s useless.”

After having this particular iPad for a couple days, I saw his point. But, it wasn’t the device itself that was unusable without the internet, it was the configuration. I asked if it was okay if I added a few free apps to the device, but my friend expressed some reluctance to ask Paddington’s mom for her iTunes password.

The realization I came to was not that the device was dependent on the internet, but that the true power of the iPad is in the apps. I realized how little time I actually spend in mobile safari on my iPhone. Most of my time is spent in apps based on the task at hand. If I want to check baseball scores, I use MLB at Bat. If I want to check the weather, the Accuweather app. Now, both of these apps, while separate from the browser, are dependent on a connection to work. But many other apps are stand-alone (like games), or use the web to sync but present the content offline (like OmniFocus).

To test this out, I did a quick inventory of the apps on my iPhone.  I created four categories for the apps:

Here’s how the categories filled out. 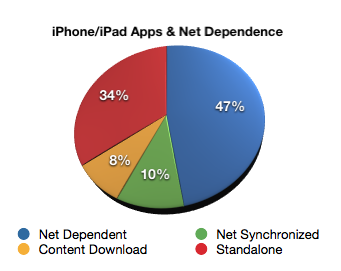 As you can see, more than half of the apps could be used (at least part of the time) without a network connection. I think my friend’s experience was a result of the fact that he was unable (or unwilling) to install applications on the device.

Like I said, though, the interesting thing to me wasn’t proving that the device could be useful disconnected, but that my usage had migrated from being primarily in the browser to using specific apps for specific purposes. Remember when all functionality was moving online and the browser was going to be the only app you needed? This represents a shift back to the app as the primary container for functionality. My guess is that functionality is easier to compartmentalize and understand when it’s behind an application-launching button than it is when it’s on the other side of a URL.